The exhibition Migrations in Art - the Art of Migrations explores the phenomenon of social migrations reconsidering its historical and present context, the reasons and the effects of migrations on societies and individuals. The idea of this exhibition is to observe, examine and understand the phenomenon of migrations that affects nations and raises many ethical and cultural issues during the current global migration crisis. Working at different levels - temporal, spatial, ethical and others, the exhibition provides us opportunities to reconsider our own attitudes and the attitudes of society, or even civilizational challenges through the language of art.

The aim of the exhibition is not to provide viewpoints on the phenomenon of migrations, but to create a space for social dialogue regarding the phenomenon, through the selection of representative and interesting examples of artistic creation. Such a space would enable us to take on notions such as fear, (lack of) empathy, (mis)understanding, contradiction and human compassion.

The project Didactic Wall by Mladen Miljanović is a subversive educational installation that focuses on the issue of migrants, refugees, displaced persons and apatrids, and the difficulties they face when moving towards their desired geographic destination. This is an engaged set of illustrations that address directly those who are trying, in an “illegal” way, to cross national borders to get to their “land of dreams”. The Didactic Wall is a kind of instruction on how to overcome natural and artificial barriers a “person on the move” may possibly come across. The project was shown first in Bihać as site specific, as the place of massive blockage caused by the fact that the green border was closed by the border authorities of the neighboring EU/Croatia. For the migrants and refugees, Bihać has become a place “on the edge” in the literal meaning of the expression. The place of imprisonment between two realities – one that they are headlessly running away from, and the other – they are madly running to. Essentially, Bihać has turned into a dangerous place that reflects a difficult and unpleasant position of the “people on the move”. It has become a symbol of enslaved human freedom, although it is a transit location, where migrants don’t want to stay for a long time. It is this artistic context where the Didactic Wall has its place, and Miljanović confirms his own rule that art can, but also should be, a criticism of disastrous policies, unethical rules and immoral values. The Didactic Wall is an engaged action that clearly and vocally takes position of sensitive and vulnerable population that has, by chance, been stuck not only in Bihać and Bosnia and Herzegovina, but also in numerous other places on this planet. As the artist says in the text of the exhibition catalogue, “in the City of Bihać, this project/exhibition acts like a “site-specific” intervention or as art in context, aimed to act as a space for education and assistance in overcoming the practical obstacles and situations faced, or threatening to face by migrants.” Miljanović's intention is determined by the motive to create a functional and effective instruction for overcoming natural and artificial barriers, such as water bodies, injuries suffered in the wild, fences, infrared rays, radars, etc. This is a utilitarian pictorial mission with an engaged prefix that is carried out in the medium of didactic illustrations.

* The Didactic Wall is a project that was premiered as a site specific intervention in the City of Bihać, in 2019. It was realized in cooperation with the curator Irfan Hošić and the Revizor Foundation, and the entire project was dedicated to draw attention to the unenviable position of migrants, people on the move and to offer possible answers that cultural institutions, and artists can provide along the way of these people. 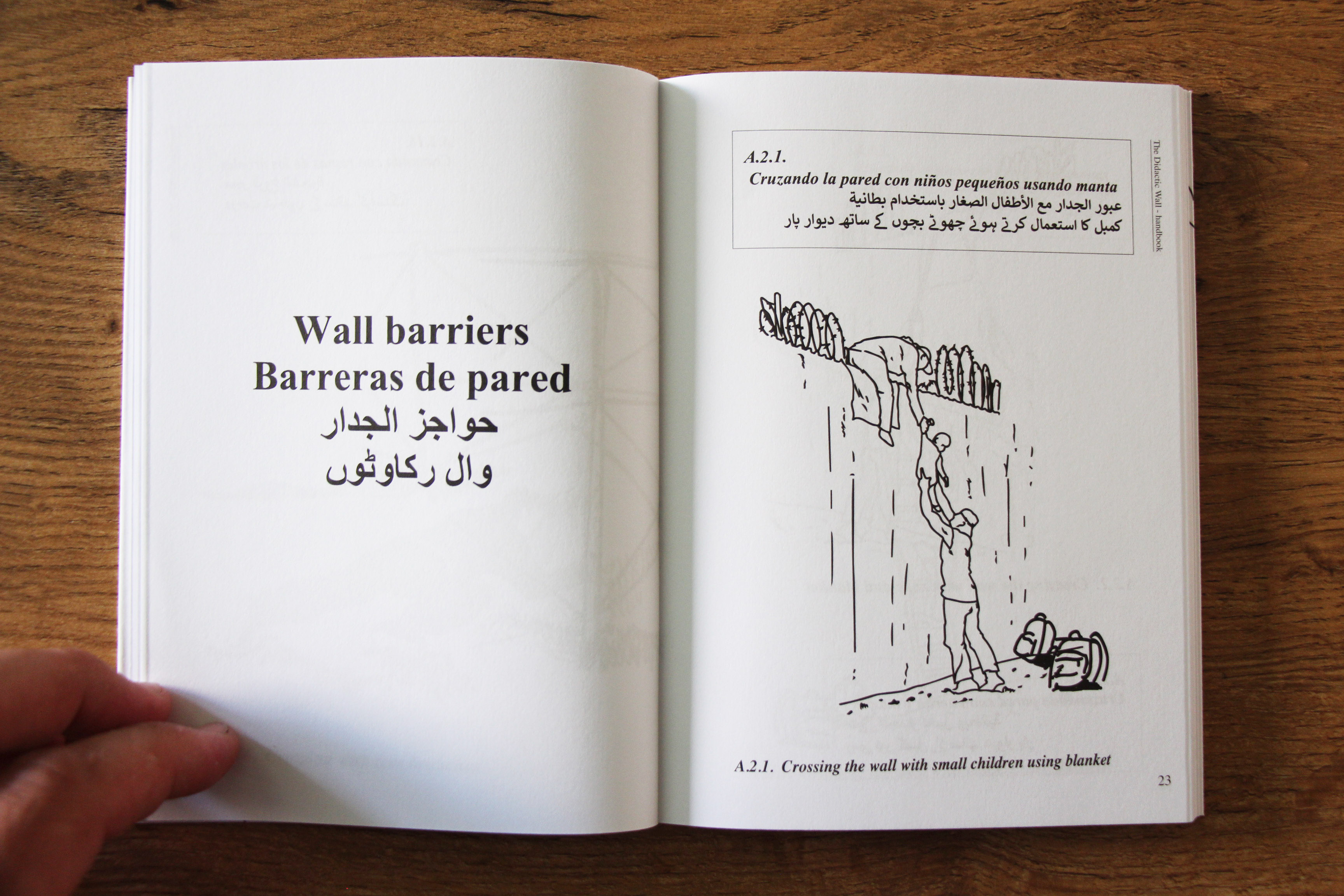 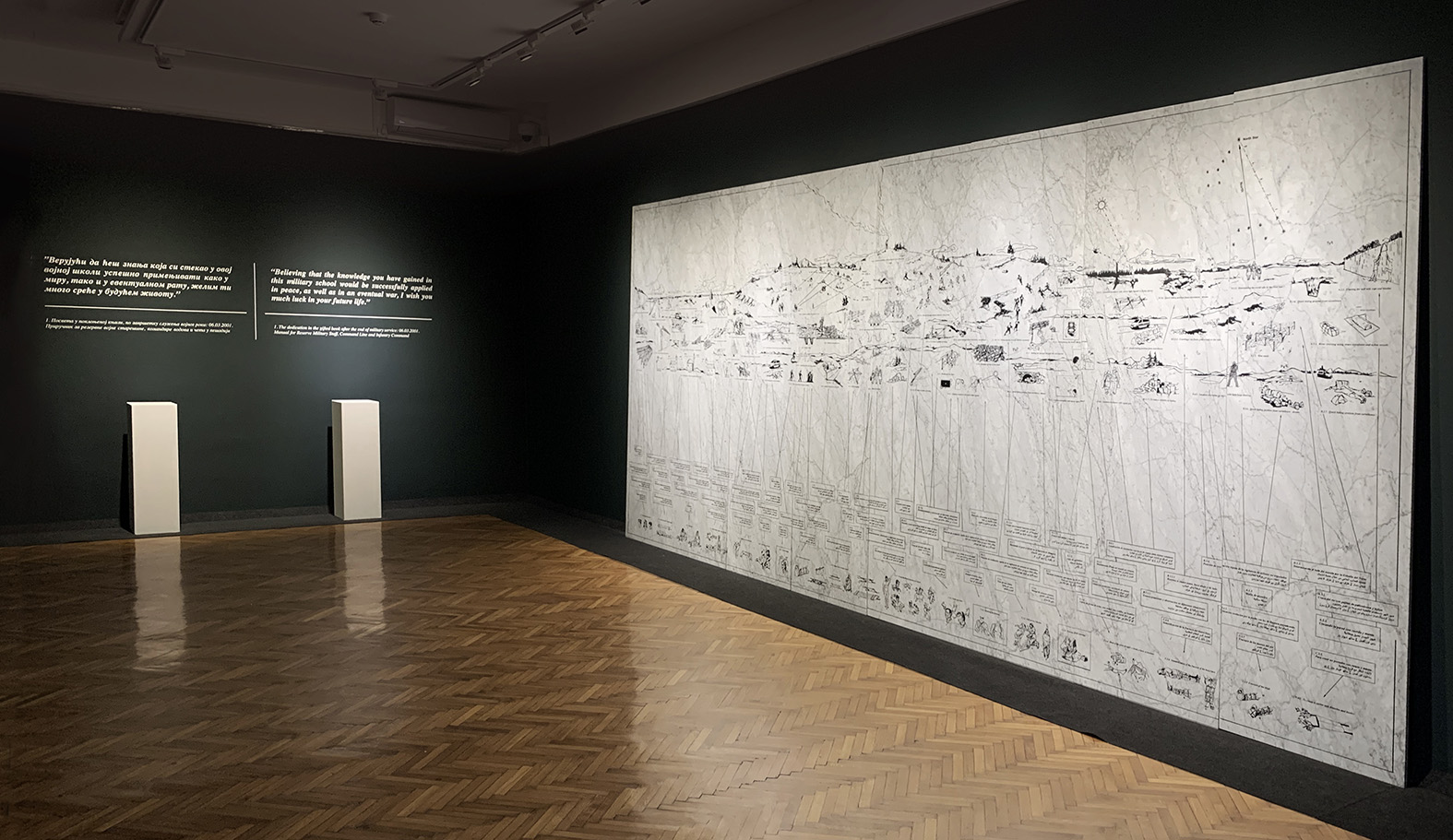